You could even say that it has had more of it than needed.

So it happens that Bình Thuận Province’s Tuy Phong District has extended dry periods and the highest speed of desertification.

While this can sound a bit sad, these weather conditions also set the stage for having a lot of fun when we were children, because they created big sand dunes. Imagine having your own “Sahara desert” in your backyard, which is what we called the dunes. As children we never saw the dunes as anything less than wonderful. And on the fringes of the dunes, poplar groves planted to stem the desertification onslaught made for great picnic sites.

For a long time, these dunes were one of the nation’s hidden charms, known only to locals.

Early in the morning, we got on our bicycles and took food and drinks to the dunes. Around noon, we ate the food and sang songs in the poplar groves, enjoying the cool breeze. All the stress of school and studies melted away here. When the sun stopped blazing, we ran to the highest sand dunes and held sliding races.

Now, the sand dunes have come into the public eye in a big way. As the sun and wind sculpt the dunes into different shapes and sizes, visitors and photographers capture the magic, which is further heightened by the 18 colours of the sand, now raw material for works of art.

Around 89,995 hectares in Bình Thuận, or 11.3 per cent of the south-central province’s total land area, has experienced desertification, mostly in the northeastern districts of Tuy Phong and Bắc Bình.

Frequent sand-storms blowing inland from the coast care creating more and more new sand dunes that can cover thousands of hectares and reach heights of forty to fifty metres.

The provincial authorities are trying to turn the disadvantage of desertification into a tourism advantage. Already, the sand dunes at Mũi Né, Fairy Stream and Bàu Trắng have become known tourism sites.

At the Mũi Né Flying Sand Dune, 22 kilometres north east of Phan Thiết City, sand-boarding, where visitors slide down on a thin sheet of plastic from the top of the dunes, has become a popular sport. The US “WondersList” ranks Mũi Né second among the top 11 sand boarding sites in the world.

A recent convert to the sport is my daughter, who has overcome initial fears and developed a passion for it. The Mũi Né Flying San Dune has become a must-go attraction whenever my family visits home on a holiday. Access to this site has become much easier now after the authorities asphalted a 26km long, 45-50m wide street along the dunes and the nearby beaches. 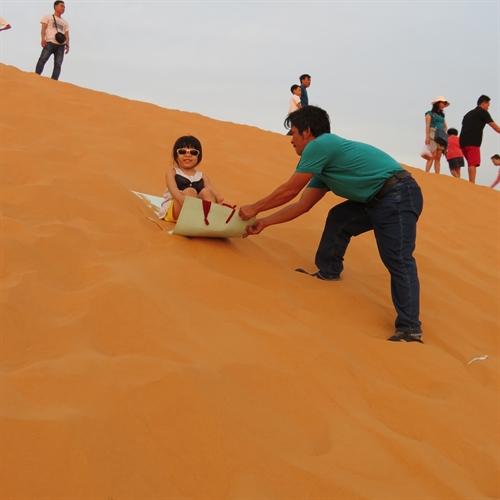 It makes me happy that my native place now boasts a picturesque landscape on either side of the street, with beaches, resorts and sand dunes.

I cannot describe my native place without mentioning its culinary specialties, the most special of which could be the dông, a kind of lizard that lives in holes dug into the sand dunes. Early in the morning, they come out for the dew and food, and in turn, take their place on the food chain. The dông’s meat is delicious and chewy. Several dishes are made with it.

For starters, it is minced, seasoned with onion salt, pepper and chili, and mixed with vegetables to make a salad. It is also cooked with a type of melon, red melon, to make a soup. Grilleddông is special treat.

These dishes are not only delicious but also healthy, local residents assert. The increasing popularity of this meat has meant that more and more people catch them, and dôngbreeding farms have opened in Tuy Phong and Bắc Bình districts.

One man in Tuy Phong District told me that his family’s income has risen significantly after they opened a dông farm.

I am even happier now that my hometown has now become a great place to visit, not just for me and my family, but for thousands of people from all parts of the world. —VNS